Underwritten by the University Co-op, the Granof Award is named in honor of Dr. Michael H. Granof, former chair of the Co-op board and longtime professor at the university. The winner of the Granof Award receives a $6,000 prize. 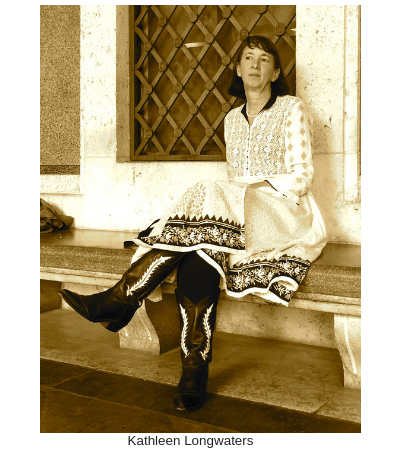 In recommending her dissertation for this award, her nomination and support letters noted that most Ph.D. students studying Asian Cultures and Languages focus on one area and discourse. However, Longwaters’ work bridges two language and discourse traditions.

“Aside from the groundbreaking effect that, we expect, the work will have on the study of South Asia, it should be noted that this is a highly relevant issue also in our contemporary world,” said Associate Professor Oliver Freiberger in his nomination letter. “Debates about hospice care, palliative care and euthanasia will surely benefit from considering the perspective of medical experts who, although operating in a different cultural context, were confronted with very similar existential questions.”

Longwaters is currently a visiting faculty member at St. John’s College in Santa Fe. She made time to discuss her prizewinning work.

Why did you pursue the topic of end-of-life care in particular?

Previous to pursuing a Ph.D. in Asian studies, I had worked for 15 years in a clinical genetic laboratory, and much of that work involved analysis of samples from patients with leukemias and lymphomas. One day, the result from a bone marrow taken from a 90-year-old man came across my desk. Bone marrow extractions are painful procedures, and I asked myself why an elderly person would be put through such a procedure simply in order to be able to tell him that he did not have long to live. I had a feeling that he already knew as much. Nevertheless, I had worked in the medical field long enough to know that things can be more complicated than they seem. Sitting in a centralized testing lab far from actual patients, I knew there was much that I did not know about any given situation. Still, it raised a question about end-of-life care that stayed with me. 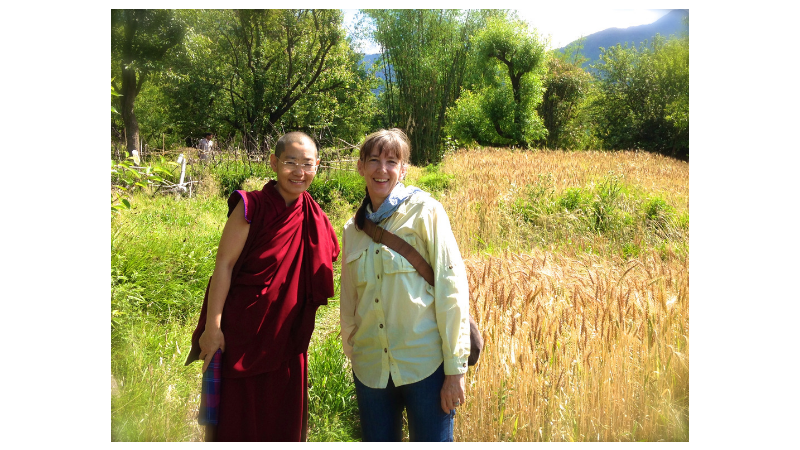 Explaining the transition from genetics to the study of Sanskrit would take too much time here—though it is not as odd of a transition as it might first sound, I’d argue. When I first encountered the language due to previous work and experiences, I recognized that it would be a great language for the sciences, so exploring medical writings in it was a natural choice. And the NIH calls for re-envisioning end-of-life care made studying approaches to death and dying a natural choice.

Why did you choose to examine it in both the Ayurveda and Unani traditions?

Studying two traditions simultaneously had a dual purpose. It helped me avoid a simple binary comparison between East and West and simple, better-or-worse comparisons that often result from such. It made the situation more complex. But there are several medical traditions in South Asia I could have chosen to look at. I chose these two because each is and has been present in different cultural and religious milieus. Not that they occur only in one or the other exclusively, but they grow from one or the other and are predominantly associated with only one. Ayurveda is associated with the Hindu tradition and Unani the Islamic. This is important because each has different ideas about what happens after death: Rebirth versus final judgment. Thus, I hypothesized that might cause different medical approaches, as indeed is the case.

How did this approach suit the subject matter? What were you able to discover by comparing the two that otherwise wouldn’t be apparent?

One goal of this research is to help make current end-of-life care more culturally sensitive. What becomes clearer by looking at what actions are taken or not taken in relation those who are fatally ill is what is at stake at a deeper level. That is, those actions (which can be non-action) point to understandings and definitions of death. For example, if the departure of the final breath marks the departure of soul, then brain death is not going to be the most relevant factor for that family. A different definition of death is operational here. Looking at these two medical traditions side by side and asking what is seen as the ultimate cause of death brought me to a greater understanding of each. 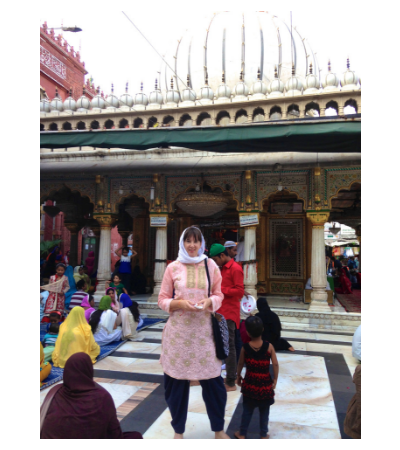 I also chose to look at these side by side because there is an outstanding historical question about their relationship. This question is particularly seen in the matter of humors. Unani, the Islamic medicine with its Greek roots, has four humors while Ayurveda has three. One might be tempted to jump to the conclusion that one was added to make the four, or one was dropped to get the three. However, this research supports the idea that both grew out of a system of two humors, the four just adding negative qualities to where there had only been positive ones. A further unrelated change added a third humor to the system of two. This work is supported by and supports the recent theory that an ancient Persian system of two humors existed (see Dominik Wujastyk). This would be important historically if it turns out to be so because it would give a common precursor to Greek and South Asian systems of medicine which is not simply one coming directly from the other.

What were some of your biggest challenges in conducting your research and analysis? How did you overcome them?

The greatest challenge for any graduate student is to have enough funding to be able to carry out studies, research, and writing in an efficient manner. I am very grateful for the generous support I received from The University of Texas, and I was lucky in also receiving ample funding from various external sources such as Fulbright and FLAS.

Another big challenge in this field is the time away from home required. One is always coming and going from abroad. I was already splitting my time between my home in Santa Fe, NM (where my husband remained) and Austin, then throwing India into the mix. Having to pay rent in two cities and a mortgage in another is not fun. I did a lot of long-term housesitting in Austin to help defray costs. But, if I ever find myself with a goodly chunk of money, I’d like to donate a house to the department where students can come and go as their studies require without running into problems paying for places when they are not there or having to find new places multiple times. 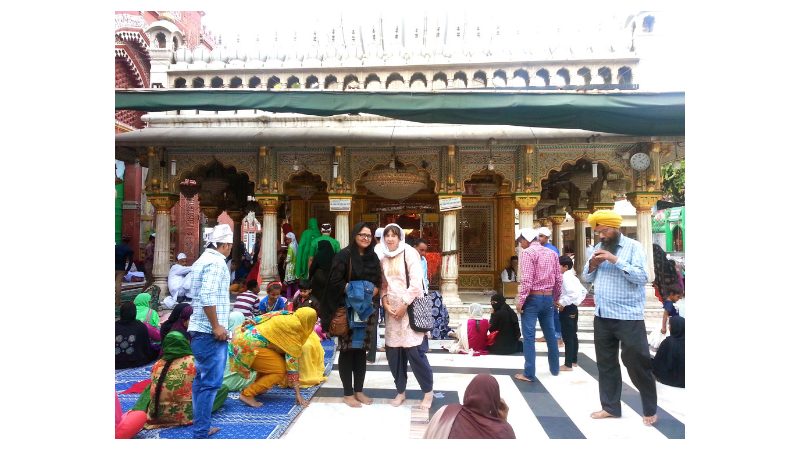 Another issue involved in my research is that I did work in both Muslim and Hindu communities. Though many Hindus and Muslims are good colleagues and friends, there is also in some places and with some individuals a tension felt. People were not always open to the fact that I wanted to study both systems of medicine, and some diplomacy was required. I also at times encountered a protectiveness on the part of people who wanted to make sure materials would be used in a positive sense and not to disparage that community in any way. However, I also encountered individuals and institutions who were remarkably generous, open and helpful. I found librarians often to be especially dear.

In your opinion, what are the most significant findings from the work? Was there anything that surprised you? 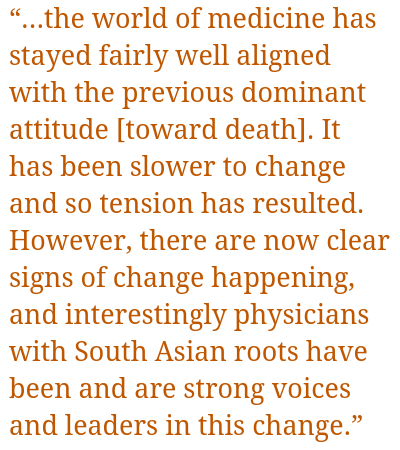 What surprised me the most was that I came to a better understanding of how we got where we are in our current medical approach to death and why the approach has been causing especial consternation for family and patients. This understanding grew out of the literature portion of the study, primarily from putting Aries’ “The Hour of our Death: The Classic History of Western Attitudes Toward Death Over the Last One Thousand Years” next to Gawande’s “Being Mortal.” It became apparent to me that one thing that has happened is that there has been a change in our attitude toward death, one happening after Aries’ study ended (first published in 1981 after 15 years of working on it). Gawande’s work helps illustrate what some of the factors are that led to such a shift, but it is also apparent to me after doing my study that the world of medicine has stayed fairly well aligned with the previous dominant attitude. It has been slower to change, so tension has resulted. However, there are now clear signs of change happening, and, interestingly, physicians with South Asian roots have been and are strong voices and leaders in this change.

What relevance can your findings have for health care more broadly or for individuals and caregivers experiencing these issues within a Western tradition?

Each of these medicines has something to teach us. Ayurveda is a medicine which is not reluctant to admit its own limits and to stop treating those who are fatally ill. Religious and cultural beliefs have made this an easier stance to take. If one believes in rebirth, clinging to a broken-down body has less of a hold. Why drive an old beat car if you can trade it in for one that is brand new? (Not that it is all so simple, but I am speaking generally here.) The perception prior to this study was that the Aryurvedic physician would not treat a dying person in order not to tarnish his reputation as a healer. However, my study shows that efficacy was the primary concern. It also indicates that in spite of clear guidelines about whom to treat and whom not to treat, that it remained difficult to carry out those mandates. The injunction not to treat the dying appears over and over again. This is a lesson for us today. We can choose do not resuscitate orders, we can make standards of care, but conflicting pressures still often make themselves present at the moment of crisis. 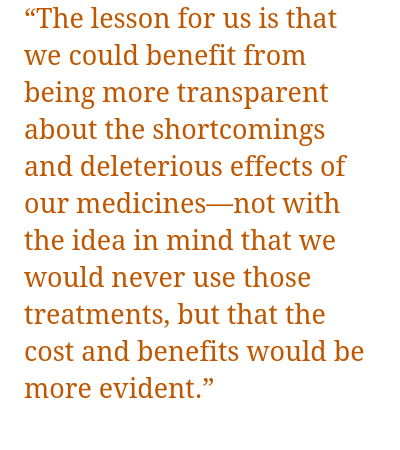 For other reasons, Unani is a tradition that is very cautious about the use of medicines and very aware of the deleterious effects they may have. When a patient appears to be dying, the physician does not presume to know God’s will, so does not assume a disease-specific outcome. Patients are not given up on, but there is also consideration for not causing damage due to drugs and treatments in case the patient does live. The lesson for us is that we could benefit from being more transparent about the shortcomings and deleterious effects of our medicines—not with the idea in mind that we would never use those treatments, but that the cost and benefits would be more evident.

© The University of Texas at Austin 2020